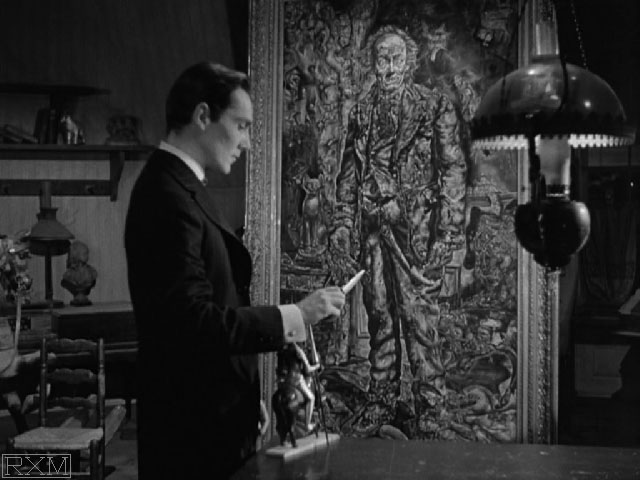 And [Jesus] said, “What comes out of a person is what defiles him. For from within, out of the heart of man, come evil thoughts, sexual immorality, theft, murder, adultery, coveting, wickedness, deceit, sensuality, envy, slander, pride, foolishness. All these evil things come from within, and they defile a person” (Mark 7:20-23).

Oscar Wilde’s The Picture of Dorian Gray is a thought provoking tale that plays on the difference between what is on the inside of a man versus what is seen on the outside.

An artist named Basil Hallward meets a young man named Dorian Gray. Impressed by Gray’s beautiful physical appearance, Hallward paints a picture of him. A friend of Basil’s named Lord Henry Wotton promotes a worldview that beauty and sensual desire are the most important things in life. Falling under the influence of this philosophy, Dorian wrestles with the harsh reality that his beauty will one day fade and thinks aloud that if only the picture could age instead of himself, he would sell his soul. A Faustian bit of magic grants this request, with the caveat that the picture will not only age instead of Gray, but also take on the changes in appearance for all the evil acts the man commits.

Dorian Gray therefore goes through year after year of life looking perfect and beautiful on the outside, while his picture becomes hideous and disfigured, the embodiment of all the evil within him. He remains “pretty as a picture” while the picture becomes “ugly as sin.” Only in the end, as a distraught Dorian stabs the picture trying to cover the evidence of his own depravity, does he become the picture, dying with a knife through his own sin-filled heart, and leaving behind his own twisted corpse, a final hideous representation of his own sins.

The connection to the text is clear: the evil that is on the inside of each of us doesn’t show itself at first, but is eventually revealed in our actions and attitudes. Even when we can keep it hidden, in the end, judgment brings to light all the evil we would try to hide.

In our Gospel Reading last week, Jesus faced the criticism of the Pharisees and the scribes because He and His disciples did “not walk according to the tradition of the elders” but ate “with defiled hands.” Jesus took them to task for “teaching as doctrines the commandments of men,” and “rejecting the commandment of God in order to establish [their] tradition.”

But Jesus does not simply refute and criticize the Pharisees, this week He also teaches the people the correct understanding of God’s will and human nature. Jesus turns the pharisaical conception of impurity upside down. What defiles a person is not what goes into a person—what they eat or drink—but the darkness that lurks within their hearts. You can’t whitewash a tomb and rid it of the corruption of death it contains inside. A pretty façade won’t fix a building that is structurally unsound.

We are a “beauty is skin deep” culture that too often judges value by appearance. But even worse is how we judge sin. Our nature is to focus on external sin rather than on internal sin—the outward actions rather the source.

We are much like the Pharisees in focusing on external sins of others rather than recognizing and repenting of the sins that come from within ourselves. We see a married man hold hands in public with a woman twenty-five years younger, not his wife, and assume the worst, but we don’t see what’s going on in our hearts when we flip the remote back to the channel we shouldn’t see. We see a woman flaunting her furs and jewelry, but we don’t see the envy and greed that surge through our heart. We see the story in the paper about the latest mass shooting, but we don’t see how being angry with someone at church is murder too.

What is inside of us is killing us. We are also those people who may look okay on the outside but are actually dying on the inside.

The old radio show The Shadow always began by asking, “Who knows what evil lurks within the hearts of men? The Shadow knows!” Well, someone knows even better than the Shadow. Jesus pointed out the evil that lurks in our hearts that we may be able to hide from others. It’s not what goes into us but what is inside of us that is killing us. We are sinners, by nature, wicked and rotten to the core.

God looks into the heart, not to outward behavior. And like a spiritual MRI, Jesus diagnoses the source of our problem—the condition of our heart: “What comes out of a person is what defiles him. For from within, out of the heart of man, come evil thoughts, sexual immorality, theft, murder, adultery, coveting, wickedness, deceit, sensuality, envy, slander, pride, foolishness. All these evil things come from within, and they defile a person.”

Beginning with sexual immorality, twelve kinds of evil thoughts and actions are combined in a dreadful litany of vices. The first six are in the plural form and describe behaviors; the last six are in the singular and have more to do with attitudes. These twelve vices, all of which come from within, leave no doubt to the wretched impurity of the fallen human heart. These things rage first within the heart and them come out in actions and attitudes.

Dear Christians, it is essential to our eternal welfare that we understand the seriousness of our situation. Sin, the transgression—the breaking—of God’s Law, is not limited to outward sinful acts—the evil things that we’ve done, the good things we’ve failed to do. You are fooling yourself if you think you’re doing all right simply because you haven’t killed anyone yet, never had a marital affair, committed grand theft, or perjured yourself in a court of law. All of us have sinned against God through anger, lust, covetousness, failure to help another, the list goes on and on. Jesus looks into the hearts of man and sees that nothing proceeds but sin and iniquity. This has been the case for all men since the birth of Cain and Abel.

Now, the world around us likes to put in its own two cents about the goodness or badness, if you will, of mankind. One popular notion is that man is basically good, and that it’s the evil found in society that corrupts him. If we just fix society, then people will be free to live out their basically good lives. Another idea that is popular among Christians is that man is born neutral—that young children are neither good nor sinful, and their upbringing will determine what kind of people they are to become.

Scripture, however, says something else entirely. It tells us that the desires of man’s heart are only evil continually, that through one man sin came into the world, and on account of sin, death. Scripture further declares that we are conceived and born in sin. So much for being basically good!

So, can’t we do something about it? Knowing that we have original sin, doesn’t that just mean that we need to try harder?

Well again, what does Scripture say? It says that we are born dead in our trespasses and sins, following the course of the world, living in the passions of our flesh, carrying out the desires of the body and mind, and were by nature children of wrath. The last time I checked, dead people can’t do much for themselves. And even if we could, it’s pretty clear that we would not want to. And even if we wanted to, Scripture also tells us that the wages of sin is death, and that one who breaks the minutest detail of law is guilty of breaking it all. So much for evening the score and making up for our own sin and guilt!

Jesus points to the condition of our hearts because He wants us to recognize our fallen nature—that we’re not sinful because we sin, but rather we sin because we’re sinful. It all begins in the heart, which is sinful and is deserving of everlasting death even before one is born and breathes air for the first time. Jesus teaches that people are not defiled by food or things entering the body from the outside, but rather by their own evil inclinations and sinful behaviors.

This teaching exposes the uselessness of our own excuse-making and self-justification. It dismisses our claims that other people and things are to blame for our shortcomings and failures. It demonstrates the futility of simply trying harder to not sin and do the right thing.

However, Jesus does not merely condemn; He also sets free. It takes something completely outside of you to wash you clean on the inside. God looked into His heart, not yours, to devise a plan for our salvation. It wasn’t anything inside you that paid for your sins—no good, pure thoughts of the heart, no outward action that would please the strictest Pharisee. It was the God of heaven, infinitely above us, completely outside of us, who came to earth and paid the price for sin: His life on the cross. Look away from yourselves; look to Jesus up there on the cross; His pure, undefiled, sinless heart broken, pierced through for our sinful ones.

And then the Holy Spirit—from outside—comes into our sinful hearts and brings the cleansing of Jesus’ death. He comes to you in the water of Baptism, which washes away your sins in a miraculous way. He speaks to you, not in a whisper from within (our sinful hearts could play all kinds of tricks with that!), but in God’s external Word—of preaching, of absolution, when you read and study the Bible—and He declares you pure, holy, and forgiven. And while nothing outside a person and coming into him can defile you, taking into yourself Jesus’ very body and blood in the Lord’s Supper does purify you. It brings forgiveness so real to you that you can taste it.

Through the means of grace—God’s Word and Sacraments—God creates faith in your hearts. And a heart of faith is a clean heart, purified of that sin within, and it receives eternal life. In Christ, you are washed clean of the sin lurking on the inside. Your heart is no longer ugly as sin, but pretty as a picture—the loving heart of Christ. Indeed, for Jesus’ sake, you are forgiven for all of your sins.

In the name of the Father and of the Son and of the Holy Spirit. Amen.