Do you remember last week when I told you the key to understanding any of the parables is to look for the point where it departs from everyday life? Well, good luck with this one! No one behaves in the way that we would normally expect them to behave. I mean, what landowner would keep sending his servants to collect the rent when they’re being so mistreated. Couldn’t he send a couple of big guys with swords? Maybe the sheriff? Or the militia? And then he’s even so naïve as to send his beloved son! What kind of father would do that?

And the tenants. “Oh, we’re not paying any rent. Get lost! And here’s a little beating just to show that we mean business.” Then they get so crazy that somehow in their mind, they think that if they just kill the son, if they just get rid of the heir, they will somehow get the owner’s inheritance. Who could be that foolish? That rebellious? That bloodthirsty? It could never, ever happen. Or could it?

The parable itself is allegorical. It describes the history of Israel in the same way as the song of the vineyard in Isaiah 5:1-7. God is the Lord of the vineyard. The vineyard is Israel, especially the city of Jerusalem. The tenants are the Jewish religious establishment, namely, the Sadducees and chief priests in charge of the public temple ministry in Jerusalem and the Pharisees and scribes who govern the people’s piety outside Jerusalem.

As Jesus relates this parable, Luke has just noted that the chief priests, scribes, and the Sanhedrin are seeking to destroy Jesus but are reluctant to do so because the people are carefully listening to Jesus’ teaching (19:47). Jesus had just entered Jerusalem to the cheers of the crowd. He had wept over the city as He reflected on the destruction of Jerusalem that would be coming because of its rejection of Him as Messiah. He had driven out of the temple those who had turned God’s house of prayer into a den of robbers. In the verses immediately preceding, these religious leaders challenged Jesus as to what authority He had to these things.

The first four stanzas of the parable retell the history of God’s work through the prophets for the salvation of Israel. Every time God sent a prophet to Israel, it created a “critical time,” a “right season,” because prophets speak for God. They declare His intentions to save and His judgment upon those who reject Him, setting up a time that is right for bearing fruit of the faith.

The three servants who are sent into the vineyard represent all of God’s prophetic activity during the Old Testament era, when the prophets called people to repentance and to show fruits of repentance, but when that call fell so often on deaf ears. The servants are mistreated and sent away empty-handed. In the words of Isaiah 5:7, “For the vineyard of the Lord of hosts is the house of Israel, and the men of Judah are His pleasant planting; and He looked for justice, but behold, bloodshed; for righteousness, but behold, an outcry!”

Now it’s time for God’s own beloved Son to visit the vineyard.

In the phrase, “beloved Son,” there are echoes from both the Old Testament and the ministry of Jesus. The near sacrifice of Isaac, Abraham’s beloved son, foreshadowed Christ’s bloody sacrifice (Genesis 22:2ff). But the most significant echo is from the Gospel itself, where the Father said at Jesus’ baptism, “You are My beloved Son; with You I am well pleased” (Luke 3:22). Jesus, the beloved Son, will not be treated any better than the prophets who went before Him.

At this point, Jesus breaks off the parable and asks: “What then will the owner of the vineyard do to them?” Here we find a link to Isaiah 5:4, where God asks, “What more was there to do for My vineyard, that I have not done in it?” The answer in Isaiah is clear: the fruitless vineyard must be destroyed. Equally clear is Jesus’ answer to His own question: “He will come and destroy those tenants and give the vineyard to others” (Luke 20:16).

After Pentecost, the vineyard will not be leased to new farmers but will be given to them (Luke 12:32). Those new farmers do not include the previous abusive tenants. They begin with the twelve apostles who, through their commission go out into the world to make more disciples through baptizing and teaching, thus reconstituting the Church as the new Israel.

The people’s response is fear. “Surely not!” probably refers to all three events: the killing of the Son, the killing of the farmers, and the transfer of the vineyard to others. But it must happen, for the unstoppable plan of God calls for His Son to die just outside Jerusalem.

Jesus looks at the people to communicate nonverbally that these words are for them. Jesus looks with enlightened eyes at the crowds because He know the end of the story and meaning of Scriptures. But do they?  Jesus asks them in a form of a question, “What then is this that is written: ‘The stone that the builder has rejected has become the cornerstone’?” (Luke 20:17).

Jesus gives no answer, because the events of His life in the next few days will provide the answer. The people and the religious leaders already have had the answer for a long time in the Scriptures. After the resurrection, Jesus will chide the Emmaus disciples as “foolish ones, and slow of heart to believe all that the prophets have spoken” (Luke 24:25). They should have known that according to Moses and all the prophets, it was “necessary that the Christ should suffer these things and enter into His glory” (Luke 24:26).

At the beginning of Luke’s Gospel, Simeon predicts: “Behold, this child is appointed for the fall and rising of many in Israel, and for a sign that is opposed” (2:34). Throughout Jesus’ ministry, we see this come true time after time as those one would most expect to receive Jesus reject Him instead, while those who seem least likely to believe that Jesus was bringing the kingdom receive Him in faith.

From the moment Jesus entered Jerusalem, the scribes and Pharisees were seeking an opportunity to seize Him. His teaching in the temple—particularly this parable—confirmed how dangerous Jesus was for them. But they were equally aware that many believed His teaching, and they were afraid to arrest Jesus because of how the people might react.

More importantly, these religious leaders were fully aware that Jesus told this parable against them. They even may have been aware that Jesus’ reading was in accordance with the Scriptures. Jesus spoke the parable as a warning call to repentance and faith in Him who would become the cornerstone. In their unbelief and rejection, the parable’s application to them was only Law. 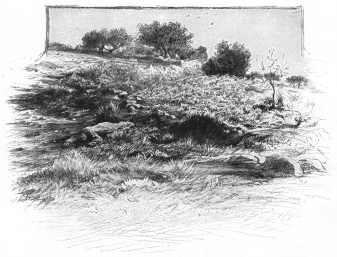 And so, how do these “tenants” in the crowd respond? They want to kill the Son that very day; and in a few days, they will.

And what does the “owner of the vineyard” do? He takes the vineyard from them and lets it out to other tenants. True to His Word, He uses the death of His beloved Son for the good of sinners. Rather than stomping the world out of existence like an annoying bug, God uses His Son’s death as the Sacrifice for the sins of the world. The Son dies on the cross for the sins of the terminally foolish and faithless tenants who kill Him. Then He rises again three days later. Why? To judge and condemn? No, judgment will eventually come; but for now, He rises to declare peace, to declare that His death was for the sins of the world, and that whoever believes in Him will be saved. The Lord uses the murder of His Son to gain redemption for the sinners who rebel against Him. Now that’s crazy!

But upon further review, maybe the parable isn’t quite so outlandish after all. That’s because it’s not about how people are supposed to treat each other. If it were, the parable is just crazy. But the parable is about how sinners treat God and how God treats sinners.

Sinners treat God terribly with disrespect and irreverence. God gives them daily bread and they fail to be thankful. God gives them things to use in service, and they hoard it for themselves and use it to boast of their accomplishments. God gives them bodies and minds to be used for honorable purposes, and they misuse and pollute them both for temporary pleasure in self-destructive ways. God gives spouses, and sinners covet those that they’re not married to. God gives family and friends and neighbors to serve, and sinners neglect them or take advantage of them for selfish gain. The Lord warns of sin so that sinners repent and don’t die, and sinners get ticked off that the Lord would try to save them from death. The Lord says, “Here I am” in His Word and Sacraments, and sinners say, “There’s really other stuff that I consider more important.”

If you examine yourself, you’ll confess that that is how you treat God, too. And if your first response is, “No, I don’t!”, it is only an echo of the scribes in the text saying, “Surely not.” Apart from the Holy Spirit, there is no one who seeks after God. This is not a pleasant truth to confess, but it is true all the same and important to confess. As long as you hold onto sins, discount them as something that God doesn’t care about, or resent God for telling you they’re wrong, then you are not forgiven. You may well be saying, “Jesus died to take away all of my sins,” but you’re also saying, “I don’t want Him to take away quite all of my sins.” If you hold onto your sins, then you are not forgiven; and on Judgment Day, you will be crushed. You will not be crushed because God wants to, but because you’ve refused the gift of grace that He has given to you time and again.

For this is how Jesus treats sinners: with patience, mercy, and grace. 2 Peter 3:9 declares: “The Lord is not slow to fulfill His promise as some count slowness, but is patient toward you, not wishing that any should perish, but that all should reach repentance.” He patiently waits. He continues to send His Word and preachers to proclaim it. He patiently showers you with forgiveness in His Word and Sacraments to keep you in the true faith, even as He patiently gives this dying world more time so that more might hear and be saved.

You will be tempted to believe that God doesn’t care; that God doesn’t care about sin because He doesn’t punish your sin immediately; and that God doesn’t care about you, because He doesn’t punish those who sin against you immediately. But it is certainly not about neglect. It is the patience of God, who suffers long to give grace to the sinner, you and others—even when it means suffering the death of His only, beloved Son to win that grace in the first place. He does not want you to be crushed in judgment. He desires that you be built upon the Rock, Jesus Christ, for eternity. Forgiven for your sins, you are in His vineyard forever.

In the name of the Father and of the Son and of the Holy Spirit. Amen