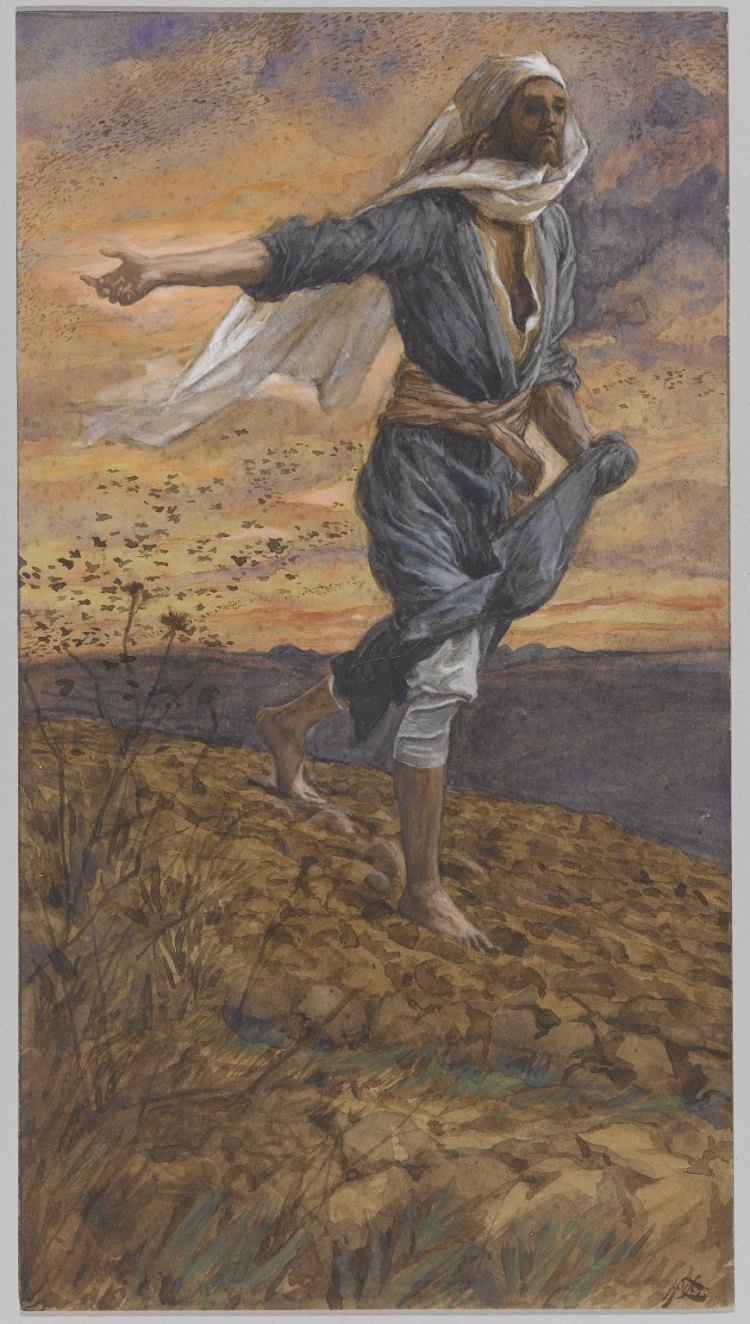 “And [Jesus] said, ‘The kingdom of God is as if a man should scatter seed on the ground. He sleeps and rises night and day, and the seed sprouts and grows; he knows not how. The earth produces by itself, first the blade, then the ear, then the full grain in the ear. But when the grain is ripe, at once he puts in the sickle, because the harvest has come’” (Mark 4:26-29).

Look around you. Right here. Here is the kingdom of God! It may not look like much. Then again, it may be a lot more than you think. To begin with, it sure doesn’t look like a kingdom. Not you. Not me. Surely not a kingdom worthy of God. Well, that’s the way it is. The kingdom of God can be quite a letdown.

We know that we live in God’s kingdom. But when we look around, what do we see? Empty seats. (Empty seats tending to be concentrated in the front pews!) And to make matters worse, when we look at the seats that aren’t empty, or the man standing in the pulpit, what do we see? Sinners! Poor, miserable sinners, who are by nature sinful and unclean, who have daily sinned against God in thought, word, and deed and who justly deserve His temporal and eternal punishment.

Well, we aren’t alone in feeling this way. In fact, Jesus’ first followers felt the same frustration—but even more so! They had been waiting… and waiting… and waiting… for the promised Messiah. At last, there were signs that He had come! The sick were being made well! Evil spirits were being cast out! The blind were being made to see, the deaf to hear, and the lame to walk! He turned water into wine and gave bread to a crowd of thousands! He calmed the storm with just a word! And this man taught with authority like no other.

But, somehow, the pieces didn’t all seem to fit. Rome still had Israel under its thumb. The corrupt house of Herod still cast a dark shadow over their land. And the One to whom they were looking for deliverance seemed in no hurry to take up a crown or raise an army. If Immanuel had at last come, why wasn’t He doing more to ransom captive Israel?

To top it off, this man was associating with all the wrong people and breaking the sacred traditions of the Pharisees. Time and time again, He did what was unlawful on the Sabbath! He ate and drank with the sinners! Tax collectors and women of ill repute were among His closest friends.

It just didn’t seem to fit. On the one hand, this clearly was no ordinary man. On the other hand, this sure wasn’t what people thought the kingdom of God ought to look like. It was so common, so ordinary, so disappointing.

Jesus knew what they were thinking—and He knows that our fallen, sinful minds just can’t wrap themselves around the mystery of His kingdom. So Jesus tells us a parable:

The kingdom of God is as if a man should scatter seed on the ground. He sleeps and rises night and day, and the seed sprouts and grows; he knows not how. The earth produces by itself, first the blade, then the ear, then the full grain in the ear. But when the grain is ripe, at once he puts in the sickle, because the harvest has come (Mark 4:26-29).

Jesus focuses on the seed. Not the soil. Not the sower. The seed is the primary actor in this parable. Although a farmer plays an important role in the cultivation of his field—after all, he sows the seed—its growth occurs apart from his efforts, even as he sleeps. He doesn’t understand how it happens. Not really. Oh, he understands you need a certain combination of seed, soil, water, nutrients, and sunshine, but no one—not even the most advanced horticulturist—know all the chemical and biological processes that are necessary to make a seed sprout, grow, and produce grain for the harvest. It’s a mystery. But that’s okay. It doesn’t really matter how it grows, but just to know that it does grow. The power is in the seed.

So it is with the Gospel. It is sown. It sprouts. It matures. It is harvested. Christ’s parable echoes Isaiah 55:11: “So shall My Word be that goes out from My mouth; it shall not return to Me empty, but it shall accomplish which I purpose, and shall succeed in the thing for which I sent it.”

The harvest Jesus speaks about includes the final harvest at the end of the world, when all mankind will see the marvelous crop the Lord has produced through His Word in this world of sin. But the harvest is also reaped here and now in the life of every child of God in whose heart the Word has taken root and grown and whose faith God uses time and again to bring that same Word to others.

Still, the harvest isn’t the believer’s doing, but God’s. Paul later put it this way in 1 Corinthians 3:6-7: “I planted the seed, Apollos watered it, but God made it grow. So neither he who plants nor he who waters is anything, but only God, who makes things grow.”

Notice that in this parable, Jesus doesn’t explain the mystery of His kingdom. It’s not the kind of mystery that can be explained. It can only be accepted by faith. But Jesus does offer comfort and hope by telling us how this mystery ends. The seed that’s been sown will produce a crop. And when the grain is ripe, the harvest will come!

In this parable, Jesus gives us the comforting assurance that responsibility for the kingdom’s growth does not rest on our shoulders. The seed has been sown and growth will come by itself—not as the product of our efforts or ingenuity. The Lord of the harvest is in control. There’s no need to worry.

So what does this mean for you? Well, first of all, it tells you how you were brought into the kingdom of God. The seed of God’s word was sown in your heart. By processes we cannot fully understand, it sprouted, took root, and has grown.

For most of you, this first happened in your Baptism. Nobody could see it; it looked like three splashes of plain water, but in that water included in God’s command and combined with God’s Word, the seed of the kingdom was sown into your heart. Your Baptism works forgiveness of sin, rescues from death and the devil, and gives eternal salvation to you and all who believe this.

And that seed continues to grow and produce new life. As the seed of the Word—God’s Law and Gospel—is continuously sown in you, your Old Adam is drowned by daily contrition and repentance and dies with all sins and evil desires, so that a new man should daily emerge and arise to live before God in righteousness and purity forever. Imperceptibly, bit by bit, you are being conformed to the image of Christ.

The second thing that this means for you is that God has invited you to be part of the process of sowing the precious, mysterious seed of His kingdom, even as you carry out your everyday vocations.

It might seem like a small thing, too insignificant for the effort it takes to have devotions with your family at the end of the day, but think about what’s happening: you’re sowing the seed of the kingdom, trusting God’s promise that that Word will take root, grow, and produce a harvest of faith.

Or how about the next-door neighbor who is going through a rough patch? You probably didn’t even think about, but in praying with her, you were not just bringing her needs before the throne of God, you were sowing the seed of God’s Word. Who knows? That simple seed might take root and grow almost immediately, or it may lay dormant for a while until someone else comes along and waters it. That’s okay. You’re not responsible for the growth, only the faithfulness of sowing the seed.

And that Bible story you shared with your grandchild? You thought you were only having a good time and entertaining them for a few minutes. It turns out you were sowing the seed of faith!

Such is the mystery of the sown seed. The Gospel, like seed, generates spiritual life and causes spiritual growth not only in a way that in incomprehensible to man. Just as plants pass from one stage to another in ways that cause us to marvel, so is the growth which the Gospel produces. God’s kingdom grows mysteriously of itself, at its own pace, and through the power of the Word.

This reality often causes frustration among those who seek a quick fix or eagerly long for a rapid expansion of the kingdom, and all the more as we only have a short-term view of things. But God’s kingdom grows according to His plan and timetable. And it is a great blessing that thing ultimately depend on Him and not on us, for only He is able to bring home a great harvest for life eternal.

So, just go out and sow the seed of God’s Word. Witness to the love of God in Christ Jesus faithfully, without worry, and in all patience, knowing it is all in the Lord’s powerful hand. Trust that it will bring results in and others. And remember, no matter your past failures or present state, God’s life-giving Word is at work in your life, too, producing faith, forgiveness, and eternal life. For Jesus’ sake, you are forgiven of all of your sins.

In the name of the Father and of the Son and of the Holy Spirit. Amen.